Need for Recognizing and Embedding Gender and Nutritional Outcomes into our Food System Approach : Over the years, the food system approach has largely focused on activities involved with production, distribution, and consumption of food. This includes processes related to crop production and livestock management, harvesting, post-production processing, packaging, transport, and consumption. With increasing levels of incidence of undernutrition and overnutrition, especially among women and children, there is a pressing need to recognize and embed gender and nutrition outcomes into the food system approach. This can be done by understanding the intrahousehold distribution, intake, and absorption of micronutrients. The overall purpose of a nutrition- and gender-sensitive food system is to enhance the diversity and quality of the food system to improve its accessibility to all people in the society, especially to the vulnerable and marginalized sections.

In this light, one of the objectives of the Technical Assistance in Indian Nutrition and Agriculture (TARINA) is to work toward developing nutrition-sensitive metrics and indices, which can be incorporated into agricultural household surveys, for tracking food system diversity, affordability, and accessibility. The research evidence can inform policies, to make them gender- and nutrition- sensitive.

The first step toward ensuring food and nutritional security is to have a diverse production system. A baseline study, undertaken by TARINA on production diversity in the four implementation districts of Bihar (Munger), Odisha (Kandhamal and Kalahandi), and Uttar Pradesh (Maharajganj), reflects that while cereals were produced by most of the households, pulses were produced by less than 30 percent of the households. Vegetables and oilseeds were grown by considerably lower proportions of households (TARINA Baseline 2016–17).

In addition to production diversity, availability of diverse foods at the market level also plays, in turn, an important role in ensuring diverse diets. An ongoing TARINA study on the availability of different varieties and diversity of foods in the agricultural markets in the four districts indicates that the number of food items available in the market are lower in Odisha, compared to Bihar and Uttar Pradesh, but the Market Diversity (MD) score, which reflects the diversity (cereals, legumes, vegetables, oilseeds, and fruits, among others) of the markets, is similar across districts. In all four districts, there is an exclusive dependence on markets rather than on own-production for non-staples, especially for fruits and vegetables, and meat, fish, and poultry products.

Although food could be available and accessible to the household, utilization and absorption of diverse foods are crucial for attaining nutritional security at the household level. Evidence from TARINA’s baseline show that cereals, pulses, and other vegetables are consumed by more than 80 percent of the women in the four districts. However, only 30 percent of the women consumes adequate quantities of micronutrient-rich food, which includes green leafy vegetables, vitamin A-rich fruits and vegetables, eggs, and meat, fish, and poultry. One of the outcomes of poor nutrition among women is reflected by the statistic that one in every five women in the sample households (3,600 households) is underweight in the four districts of the project.

Measuring Gender Imbalance in Agriculture: About 45 percent of the agricultural labor force in India is comprised of women, and most of the agricultural activities are carried out by women. Women are also solely responsible for taking care of all their households’ work, which includes taking care of the children and the elderly, cooking for the family, and fetching fuel and water. However, their access and ownership to resources, like land and livestock, agricultural inputs, and extension services, is abysmally low. Heavy workload and lack of access to resources has a long-term impact on their health and nutritional outcomes. 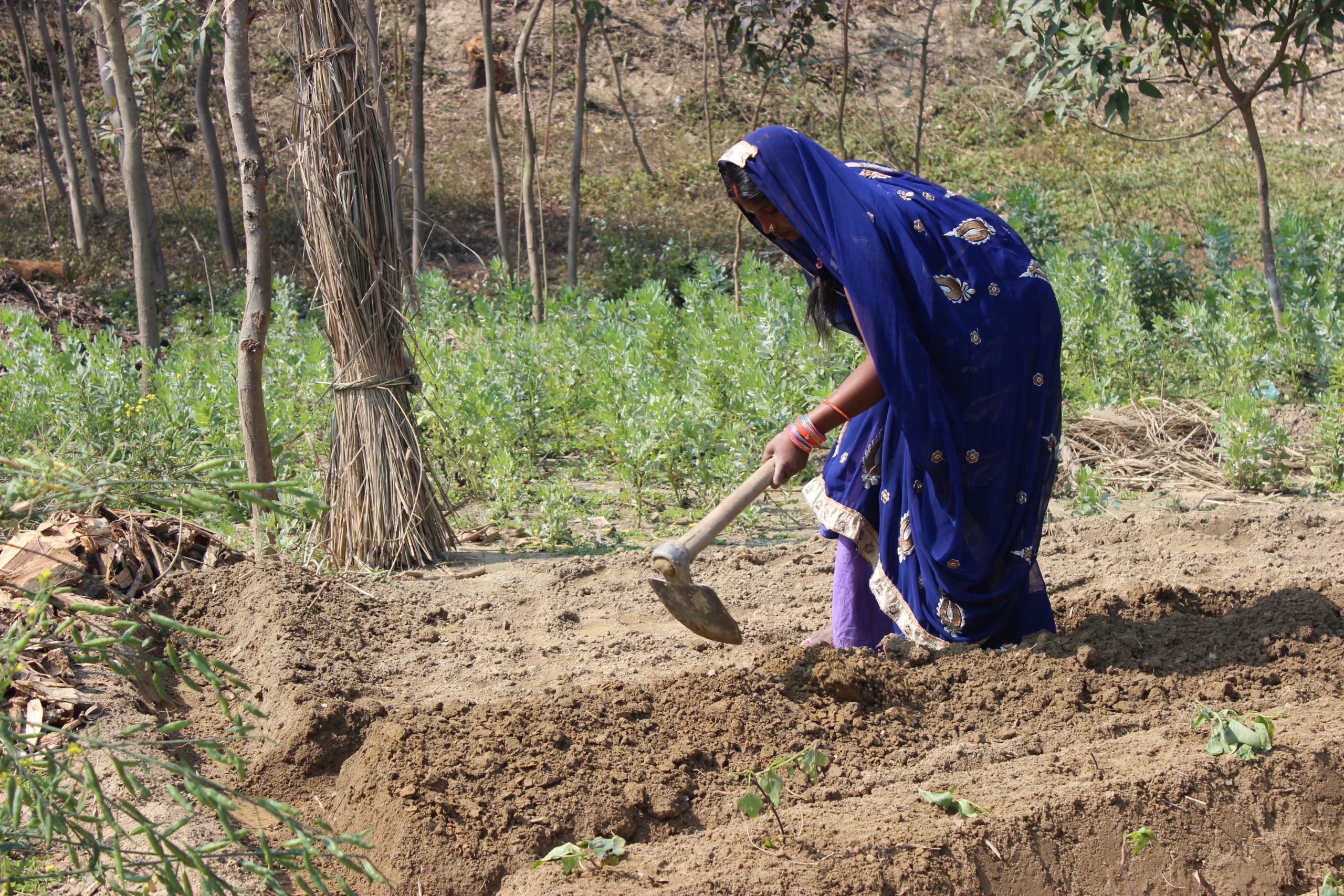 TARINA has been working toward developing metrics for embedding two critical components in the food system that measure the gender imbalance in agriculture. These components are: (1) the Women’s Empowerment in AgricultureIndex (WEAI); and (2) measuring time use of women. The Women’s Empowerment in Agriculture Index (WEAI) measures inequality in terms of roles and responsibilities among men and women in agriculture. Prior to the use of WEAI, empowerment indicators did not explicitly focus on women’s decision-making abilities in multiple domains of agriculture and also did not examine empowerment within the same household between men and women. TARINA has been able to adapt WEAI in the Indian context in its four project locations. The analysis shows that at least 80 percent of the women in these four districts were disempowered on almost half of the indicators of empowerment, such as leisure time, control over use of income, membership in a group, decision on credit, ownership of assets, and input in production decisions. Linking WEAI to market orientations of farming systems, it shows that women who have access to agricultural markets perform better in terms of empowerment status.

Measuring gender imbalance in agriculture also warrants an analysis of the time allocation to different farm and nonfarm activities performed by men and women. It is important because time allocation indirectly affects the absorption of nutrition. Using time-use methodology can be useful as women’s time use varies, depending on the type of crop (food or cash crop) they cultivate, the type and nature of activities in which they are involved, the use of agricultural equipment, and involvement of other members of the family or agriculture laborers.

( The blog is based on Bhaskar Mittra’s  presentation of the work undertaken by TCI–TARINA at the National Workshop on “Sustainability of Indian Agriculture: Socio-Economic Perspective” organized by ICAR–National Institute of Agricultural Economics and Policy Research, New Delhi, on November 27, 2018.)