Nandini Devi belongs to Bisesarpur village, Maharajganj district, Eastern Uttar Pradesh. Her family owns two acres of land, on which they practice their primary occupation—agriculture. Nandini Devi has been associated with Shankra Self-Help Group (SHG) since 2018. She is an active member of the SHG and participates in every meeting in her village. In one of the awareness meetings conducted by Grameen Development Services (GDS) under the TARINA project, her interests to interact with the community members led her to become a Krishi Sakhi or “friend of agriculture.” As a Krishi Sakhi, she received an opportunity to interact with and lead her community, especially on women’s issues and on challenges related to agriculture and nutrition in her village. Over time, she also became a confidante of many women, who shared their everyday problems and challenges with her.

As is the story across northern India after the Green Revolution, farmers in Bisesarpur practice mainly a cereal-centric cropping system. Only a small portion of the land is devoted to non-staples, like pulses and vegetables, of which of those, only a small portion is sold in the local market while most of the produce is used for household consumption. Results from TCI–TARINA research on dietary diversity (TARINA district factsheet on dietary diversity) show that, in Maharajganj district of Eastern Uttar Pradesh, women mostly consume only 4 out of the 10 food groups. Their diets consist predominantly of cereals and small quantities of pulses. Their intakes of micronutrient-rich foods, like green leafy vegetables, vitamin A-rich fruits and vegetables, eggs, and meat, fish, and poultry are very low, which can result in various deficiencies, especially among women and children.

To increase awareness on the importance of having a micronutrient-rich diet, Nandani interacts with community members on a regular basis, conducting door-to-door awareness drives and discussion sessions for members of various SHGs in the village. To improve the year-round availability of different vegetables and fruits, she has motivated around 120 households to set up kitchen gardens in their backyards or any small pieces of land adjacent to their homes. With her help and training, households are now growing 10–12 different varieties of vegetables, including spinach, bottle gourd, bitter gourd, onions, brinjal, Okra and beans, among others. 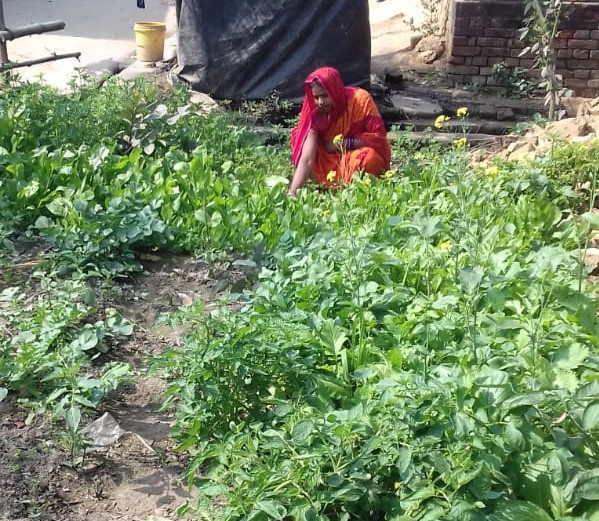 As a Krishi Sakhi, Nandini has been motivating farmers to set up kitchen gardens to improve year-round availability of different vegetables and fruits.

As a Krishi Sakhi, Nandini has been motivating farmers to set up kitchen gardens to improve year-round availability of different vegetables and fruits.

As a Krishi Sakhi, Nandini has also been working with farmers in her village, motivating some to initiate the cultivation of pulses and vegetables on their fields and others to increase their acreage under pulses cultivation, especially in the Zaid season. Over the past two years, she has been able to motivate farmers to adopt a recommended Package of Practices (PoPs) for non-staples, like pulses and vegetables.

“It is difficult to convince farmers to adopt a different package of practices, like line sowing and pesticide application, for pulses and vegetables. Whenever I interact with the farmers, I emphasize the benefits of adopting these practices. This has motivated the community members to adopt such practices.” She also demonstrates these practices to farmers on her own farm.

Nandini’s fervor to improve agricultural practices in her village and the nutritional status of women and children brings her to regular training sessions conducted by GDS for the Krishi Sakhis. Farmers have also started seeking her advice on technical matters related to agriculture, which earlier were mainly in men’s domain. Nandini is optimistic about her village, and she firmly believes that people will gradually adopt practices that will improve the overall nutritional security of their households and the entire village.

Ruchira Boss (rb838@cornell.edu) is an Assistant Program Officer for TCI-TARINA, based in New Delhi, India.