Promoting a more nutritious food system in India: The role of smallholder agriculture 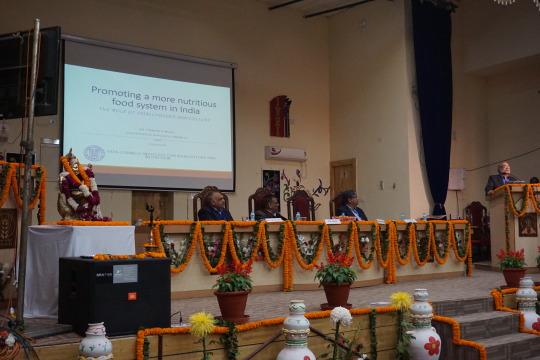 The annual AERA Conference, held at the Indian Veterinary Research Institute (IVRI) in Bareilly, Uttar Pradesh, brings together students and young professionals from across India to present their studies to veteran researchers and scientists. This year’s conference was the first to focus on the topic of “Agriculture for Nutrition Security.”

Staple grain production and consumption has driven India’s food system since the success of the Green Revolution. Today, however, the Indian population requires and is demanding healthier and more diverse foods.

Pingali proceeded to discuss the many facets of malnutrition in India such as micronutrient deficiencies, undernutrition (stunting, wasting, and underweight), and overnutrition (obesity and overweight), often referred to as the triple burden of malnutrition. Higher income states tend to have more overnutrition than undernutrition, while lower income states tend to have the reverse. There are certain states in which both problems exist simultaneously, and sometimes even within the same household.

Micronutrient deficiencies, especially among young women, are prevalent across income levels, even in middle class populations. Stunted and underweight children are highly concentrated in states of Eastern India, such as Bihar, Jharkhand, Chhattisgarh, and Madhya Pradesh. Overweight populations are largely in Punjab, Haryana, Tamil Nadu, Andhra Pradesh, and Karnataka.

Addressing the triple burden of malnutrition in India requires production and consumption of high-quality, high-value fresh fruits and, vegetables (FFV), pulses, and livestock products. “I believe the solution to underweight and overweight is the same thing. The solution is better quality food. Food that is higher in nutrition, food that has high levels of horticulture products, products which have high levels of micronutrients—those address the underweight and overweight problem,” Pingali said.

On micronutrient deficiencies, Pingali emphasized that a large part of the problem is that the major source of calories in India come from staple grains. “There is not enough zinc, not enough Vitamin A available in the food system,” he said. Moving ahead, the most important thing will be to improve overall access to foods that are high in Vitamin A, iron, and other essential micronutrients, which are missing in Indian diets.

The role of smallholder agriculture is to increase the supply of FFV, pulses, and livestock products to meet the growing demand for more diverse and high-quality foods in rural and urban areas. At the same time, India’s research and development community should also encourage the production of these foods for domestic consumption.

“Pulses and coarse cereals have moved to lower productive zones in the country,” Pingali said. “The diversity in the middle of India was captured by oil seeds, soybean, and cotton, but not the nutritious crops.”

In terms of agricultural policy, government safety net programs in India, such as the Public Distribution System (PDS), Integrated Child Development Services (ICDS), and Mid-Day Meal Scheme (MDM), all have the scope and potential to integrate nutrition objectives. However, according to Pingali, “The biggest challenge is delinking the political economy that creates a powerful bond between suppliers of staple grains and beneficiaries of safety net programs.”

Policy has the capacity to incentivize smallholder production of diverse crops, but the National Food Security Act of 2013 still has not yet shifted away from a staple grain focus. “Unless we can shift the procurement system out of staple grains, we won’t be able to create that balance.”

To watch the full video coverage of this event, please click here.

Vanya Mehta (vm335@cornell.edu) is a Research Specialist at TCI’s TARINA Center of Excellence, based in New Delhi, India.