Why agricultural income growth is critical for young women’s nutrition 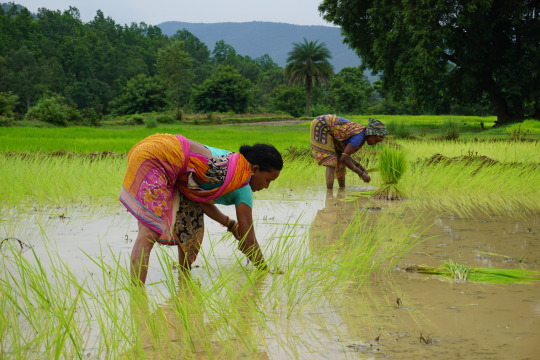 Much academic and policy interest has been generated in recent years to understand how the agricultural sector can be leveraged to address problems of malnutrition in developing countries. For improving nutrition among women in particular, agriculture─nutrition linkages are important, since agriculture is a major employer of women in countries like India. By being a source of income earned by women, agricultural income can influence the intra-household allocation of food and other nutrition-enhancing complements.

In our paper, recently published in PLOS ONE, we investigate the association between household agricultural income and women’s BMI in the India context.

It is estimated that 42.2% of pre-pregnant women in India are underweight. This compares poorly to sub-Saharan Africa where 16.5% of pre-pregnant women are underweight, despite being much poorer on average [1]. Not only is malnutrition among Indian women high, it is also persistent. Data from the Rapid Survey on Children conducted by the Indian government and UNICEF show that between 2005 and 2014, the level of malnutrition among adolescent girls aged 15-19 years has remained stubbornly high, with close to 45% of girls in the age-group being “too thin” in 2014.

Empirical evidence on the relationship between agricultural income and cultivator nutritional status in the Indian context has been impeded so far due to the lack of suitable data. Empirical evidence on this relationship is critical because a priori the direction of the association is not evident. Agricultural production may benefit nutrition by way of being a source of food and income. On the other hand, heavy agricultural workloads and exposure to toxins and disease through agricultural activities can deleteriously affect women’s health and nutrition. Normally, information on agricultural production and anthropometric data on cultivators does not co-exist in large surveys. The dataset we use—ICRISAT’s VDSA data—is a notable exception. To test the association under question, we use five years of household and individual level panel data, from 18 villages across 5 Indian states. The total number of women part of our sample varies between 791-992 women, from year to year.

We use within household variation, in lagged agricultural incomes and BMI over time, to estimate

(b) to estimate the association between agricultural income growth and BMI growth over a longer term.

Next, we explore the pathways through which household agricultural income and BMI are linked. We show that both the own-production and market purchase of food are associated with nutritional improvements. While women’s BMI is associated with an increase in the consumption of own-produced cereals, the market plays an important role in facilitating access to more nutritious foods like pulses.

We would like to leave readers with three main takeaways from our paper:

1. While the association between agricultural income growth and BMI growth is economically modest, it is important in view of the fact that we do not find a corresponding effect for growth in non-agricultural income.

2. The relationship between agricultural income and BMI is driven by young women. While we do not investigate mechanisms behind this finding, the result is consistent with multiple findings in the development literature that indicate that “low status” family members eat better in better times and vice-a-versa [2],[3]. This could be explained by families following a “pure investment strategy” by allocating intrahousehold resources to cushion better endowed or more productive household members at the cost of more vulnerable household members during scarce times, or by preference-biases.

3. Our “pathway” results suggest that income effects on account of agricultural earnings might have significant implications for nutrition in the Indian context.

By Tanvi Rao and Prabhu Pingali

Dr. Tanvi Rao is a Research Associate in the Health Division at IMPAQ International. Previously, she was a research scholar with the Tata-Cornell Institute for Agriculture and Nutrition (TCI).

Dr. Prabhu Pingali is a professor in the Charles H. Dyson School of Applied Economics and Management at Cornell University, with a joint appointment in the Division of Nutritional Sciences. Professor Pingali is the founding director of the Tata-Cornell Institute for Agriculture and Nutrition (TCI).