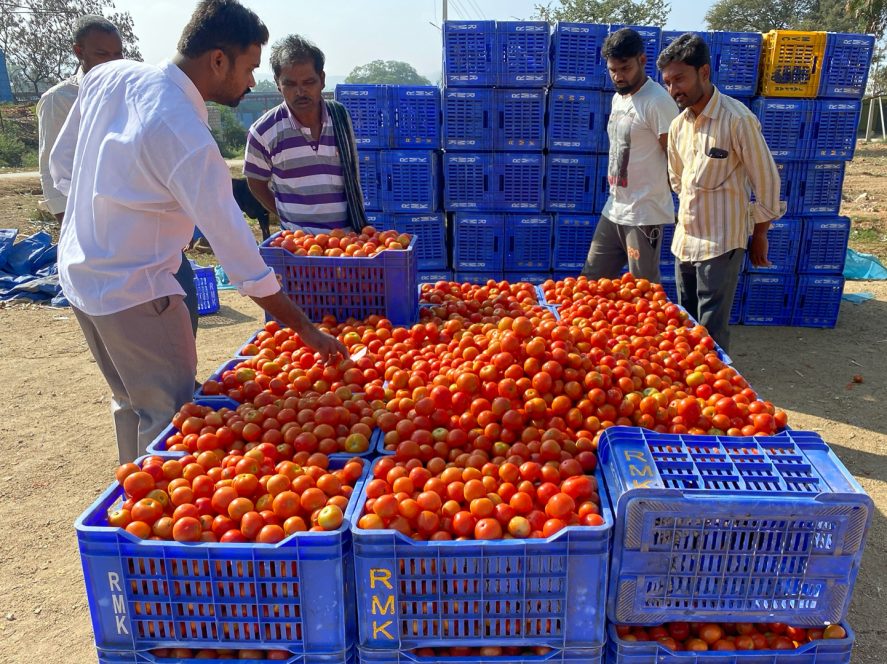 As India struggles to produce enough fruits and vegetables to meet its population’s dietary needs, food loss is an urgent issue. Globally, an estimated 14 percent of food is lost as it moves from the farm to wholesale markets. Led by Jocelyn Boiteau, a TCI alumna and postdoctoral researcher, TCI is working to address knowledge gaps in estimating food loss along perishable vegetable supply chains in India to inform effective loss prevention strategies.

Using data collected from surveys with smallholder farmers and tomato traders in Chittoor district, Andhra Pradesh, and with vegetable traders and vegetable retailers in Hyderabad, Telangana, Boiteau studies the extent and stages of food loss along tomato supply chains. Novel to this study, surveys were completed at the time of harvest, auction, and day-of-sale, providing detailed and context-specific information on factors that affect food loss.

At the Madanapalle tomato wholesale market, where most farmers sell their tomatoes, farmers lose an average of 2 percent of tomatoes after grading and sorting.

From her research, Boiteau found that farmers incur the most loss, particularly at the farm level. Forty-six percent of harvests observed in the study involved postharvest food loss. Among these harvests, farmers lost an average of 11 percent of their harvested tomatoes, most often due to quality deterioration from pests or disease. At the Madanapalle tomato wholesale market, where most farmers sell their tomatoes, farmers lose an average of 2 percent of tomatoes after grading and sorting.

In contrast, tomato and vegetable traders lose less than 1 percent of the tomatoes that they trade. Vegetable retailers lose an average of 2 percent of tomatoes after sorting out those that will not be sold.

Boiteau’s preliminary findings provide important insights that will enable further analysis of the determinants of food loss, particularly at the farm level. A clearer picture of where and why food loss occurs will help develop food loss prevention strategies to increase fruit and vegetable availability.