A new road map for rolling out a Green Revolution 2.0 in Eastern India 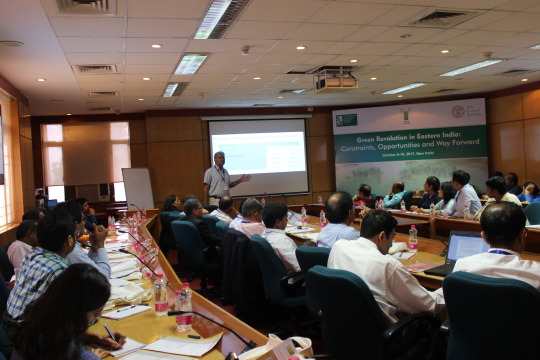 In collaboration with the International Food Policy Research Institute (IFPRI) and the Indian Council of Agricultural Research (ICAR), TCI-TARINA organized a two-day workshop, titled “Green Revolution in Eastern India: Constraints, Opportunities, and the Way Forward,” on October 9-10, 2017 in New Delhi. The event aimed to develop a road map for achieving accelerated and sustainable agricultural growth in the region. Despite Eastern India’s abundant supply of natural resources and human capital, the transformation and modernization of its agriculture sector continues to lag behind other regions. Thus, the workshop focused on leveraging opportunities and existing assets to launch a “Green Revolution 2.0 (GR 2.0)” in a region that was largely bypassed during India’s first GR in the 1960s-80s.

The workshop brought together researchers, policymakers, and practitioners from a host of organizations to:

Workshop participants agreed that efforts toward launching a GR 2.0 in Eastern India should be closely linked with the Government of India’s stated goals to double farmer incomes and to improve nutritional outcomes over the next five years. However, to achieve these goals, solutions to several production system constraints need to be addressed, including the low productivity of land, high cost of irrigation, lack of access to affordable technology, highly fragmented landholdings, and risks from market price volatility and weather conditions. Additionally, special attention should be paid to input usage for enhancing technical efficiency and increasing yields.

The main messages that emerged from the discussion include the following:

1. Labor trends: There is a need to better understand the dynamics of labor economics in Eastern India, which impact small and marginal farmers. For example, the trend in seasonal labor migration among men, who leave the region to seek other employment opportunities, and how this trend impacts agricultural productivity, should be examined.

2. Water and irrigation: While Eastern India has a relatively high groundwater table, it has been tapped to its full potential for increasing groundwater irrigation. The region has seen an increase in the diesel pump density, yet water markets have failed to become competitive over time and irrigations costs remain high. Pumps have been relatively underutilization by small and marginal farmers who are irrigating less frequently, thereby adversely affecting crop yields. Removing the subsidy on diesel for irrigation and any further investment in public tube wells was recommended. Opportunities related to electrification of pumps that could have a somewhat moderating effect on the cost of irrigation need to be further explored. In addition, the untapped potential of solar pumps for powering tube wells shows some promise for enhancing irrigation intensity in the region.

3. Machinery: While the machine density in states like Bihar has increased, there has been no concomitant increase in cropping intensity. As a way forward, it may be prudent to restrict subsidies for new agricultural machines and deregulate the machine sector, along with creating a cadre of machine service providers. This would potentially increase the utilization of machines and also create a greater degree of competition in machine rental markets.

4. Climate change: Strategies for climate change mitigation should be prioritized as part of the GR 2.0 in Eastern India. Policy on carbon pricing is crucial, but politically challenging to implement. Therefore, the focus should move toward climate smart agriculture.

5. Crop diversification: A GR 2.0 should call for farmers to shift their production away from staple grains, such as wheat and rice, toward more nutritious non-staples such as fresh fruits, vegetables, pulses, and livestock products, as an agricultural pathway for addressing malnutrition. However, crop diversification in the region would need to be clearly defined and understood in terms of the local context, especially with respect to employment (i.e. low employment among women), demand for nutritious crops, climate change, and the political economy of food security.

6. Nutritional needs of tribal communities: Tribal districts, which form a large part of Eastern India, have witnessed a high incidence of chronic malnutrition. Lessons can be taken from states like Arunachal and Chhattisgarh, which have witnessed a faster decline in stunting and wasting among children. Agricultural policy for the region should account for specific nutritional requirements of this population group.

7. Farmer producer organizations (FPOs): FPOs are considered vehicles that enable small and marginal farmers to harness the benefits that can be achieved through economies of scale. However, it was argued that this has not been the case for many FPOs in the region. With respect to India’s fragmented pulses market, it was also argued that FPOs have the capability to reduce transaction costs, thereby enabling commercialization of both product and factor markets. Given the scope of FPOs and the benefits that they can potentially provide, metrics should be developed for measuring their performance and charting out a possible locus for FPOs in catalyzing a GR 2.0. A study could also be undertaken to better understand why some FPOs have been more successful than others. Furthermore, participants emphasized the need to promote FPOs and provide them with incentives for purchasing land levelers and other small agri-machinery.

11. Land policy: The draft Land Tenancy Act, which provides more security to land tenants, could be leveraged to encourage tenants to investment in small farms as well as incentivize diversification of production through the inclusion of high-value crops.

12. Agroprocessing: Establishing agroprocessing plants in close proximity to clustered production sites would help increase farmer incomes in Eastern India. This would require enabling conditions for the private sector to pro-actively participate in transferring knowledge and technologies to farmers, as well as the provision of infrastructure, such as cold storage in some cases.

13. Agri-markets: Given the importance of competitive agri-markets in enhancing farmer incomes, deliberations focused on a host of agri-market reforms currently underway, such as the unified license for trading. Participants agreed that from a food systems perspective, the government is expected to play a major role in agricultural markets, from stabilizing prices to removing market entry barriers. It was recommended that the government develop and implement food certification policies that could be scaled across agricultural markets.

14. Market information systems: Triggering a GR 2.0 in Eastern India would require farmers to have access to real-time market information, especially on prices. Harnessing the benefits of information communication technologies (ICTs) and digital platforms would facilitate this process.

The main messages summarized above represent the key pillars of the new road map for rolling out a GR 2.0 in Eastern India. Strategies and priorities outlined in the road map will be further refined through focused research and discussions in the coming months.

Workshop participants from TCI-TARINA posing for a group photo.

Nikhil Raj (nr425@cornell.edu) is the Director of TARINA, based in New Delhi.