Can social marketing be a path towards improved nutrition? 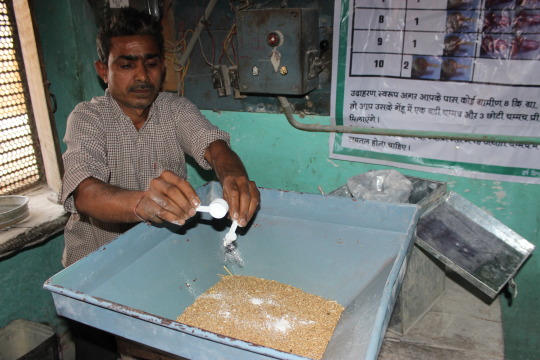 The Tata-Cornell Institute (TCI) has been running an iron flour fortification program in a tribal community in Gujarat. It uses the principles of social marketing to generate awareness about the importance of iron and other micronutrients, and consequentially aims to drive demand for the fortificant branded as “Sfurti”. The eventual goal is to understand if in such a setting it is possible to have a sustained model, incorporating micronutrient powder into a family’s regular diet, thereby supplementing for the lack of important micronutrients in the typical diet.

We have examined some of the challenges with getting a program like this off the ground. We’ve also surveyed household consumers to understand what drives purchasing behavior (e.g., the demand side). Most recently, our analysis has focused on the experience of our sellers (e.g., the supply side), namely door-to-door saleswomen as well as point-of-sale millers.

During Phase I (June ’16 – March ’17), the Sfurti program trained and employed 30 women from the local Women’s Self-Help Groups (organized by TCI’s partner organization BAIF Development Research Foundation) to pitch Sfurti to the households by travelling door-to-door. Known as Sfurti Bens, we spoke to each of these women about their experiences marketing and supplying Sfurti to their respective communities. The feedback was largely homogenous. While most of them initially faced difficulties in pitching the product to people, with increasing outreach programs and positive reinforcement from the existing consumers, convincing non-consumers became easier. This outcome, though straightforward, is quite important in understanding the efficiency of social marketing. Since these villages are close-knit, social networks are often used for the spread of any new information or product. Being a part of these social networks, the Sfurti Bens became the first adopters and once they convinced a few more people to try Sfurti, the newly adopted consumers became agents of propagation. One can simply think about YouTube sensations and how easily information is disseminated on digital social networks such as Facebook to understand how this phenomenon works in these village settings.

Additionally, the Sfurti Bens have to spend much less time in going door-to-door, because of the decreasing frequency of pitches they have to make, a consequence of the increased awareness due to the word of mouth from existing consumers. The survey revealed that most Sfurti Bens spend just about 15-16 hours a month to visit their designated households. This time, as per them, can easily be accommodated between farm or dairy work (which most of them are involved in) and dinner preparations. This is to say that making sales is not too much additional work for the Sfurti Bens and it makes the program sustainable.

However, to test if a program like this can be absolutely sustainable (e.g., that it is integrated within the day-to-day of the local community and doesn’t need any outside support), the role of Sfurti Bens must eventually be negligible. Sales should be motivated by demand in, what marketers call, a ‘pull’ manner as opposed to a ‘push’ manner (people buying it themselves versus it being sold to them through a pitch). To test this, we launched Phase – 2 of the program in September 2017. In this phase, we experimented with selling Sfurti powder at the point of milling. In 5 out of the 15 target villages, we employed the local millers, but in the remaining 10 villages, we continued sales through the Sfurti Bens.

We conducted a survey of the supply partners – Sfurti Bens and millers – in January 2018. We wanted to understand what problems they face while conducting the sales as well as what they think of the program as a whole. A general understanding amongst the Sfurti Bens was that while the program has made households much more open to the idea of purchasing, most still need to be driven to purchase. Even the millers in interviews agreed that while the point of sales was shifted to them, Sfurti Bens would need to check up on households which were either buying irregularly or were not buying at all.

Moreover, the millers feel it is difficult for them to be able to sell the powder because of two reasons. First, most households do not interact with the miller. The process is simple: people leave their grains at the mill and later in the evening collect the flour and pay the miller, giving no opportunity to the miller to take consent for adding the powder. Second, the millers either by lack of knowledge about the powder or due to time constraints are not able to pitch the powder to the households. In their opinion, unless it is pitched to the households (by Sfurti Bens or someone else), they wouldn’t be able to sell it. The second reason corroborates what the Sfurti Bens feel: the households need to be driven to purchase. However, the point of Phase – 2 was to precisely test this question: after an intensive campaign, would people start buying the powder on their own?

So far, sales have dropped in Phase – 2, in all the villages, but more so in the villages where millers are being used. The drop in all 15 villages seems to be a result of a 5 month gap in the program (April ’17 – August ‘17). A few of the regular consumers have now stopped consuming because the gap in supply led to a reversal in the benefits that they derived from consuming Sfurti – less fatigue, better appetite, etc. The reversal of the benefits, according to Sfurti Bens, gives people an impression that because of stopping consumption they are now worse off than they were before the program was initiated. A minority of the people who had just started consumption, and were yet to see its impact, now consider the Sfurti program as a non-serious initiative, hence, it may take a few more months to regain their trust and motivate them to consume. Although this unintended gap was an outcome of some bureaucratic problems faced by the team, the hiccups we now face are a key learning for us. The perceptions people have built by a discontinuity highlight the importance of time lag effects in such a program. Despite 10 months of awareness generation, a 5 month gap not only undid past learning, it also led to creating negative perceptions. However, we are slowly picking up and once data from more recent months come in, we will be able to analyze how big or long-lasting the time-gap effect has been.

Finally, having initiated Phase – 2 and completing interviews with the Sfurti Bens, we are now in a position to combine our sales trends with household level data and adjust for differences in selling approach (door-to-door versus point-of-sale) to separate all the different effects at the intervention level, village level, and household level. This would eventually lead us to answer our research question: What makes people buy such products in a social marketing setting and whether or not such a program can be made sustainable? In other words, once we (the TCI team) leave, can this program sustain itself on its own?

Prankur Gupta is a Master’s of Science student in Applied Economics and Management at Cornell University’s Charles H. Dyson School of Applied Economics in Management. His research with the Tata-Cornell Institute (TCI) focuses on consumer behaviors in rural Gujarat.