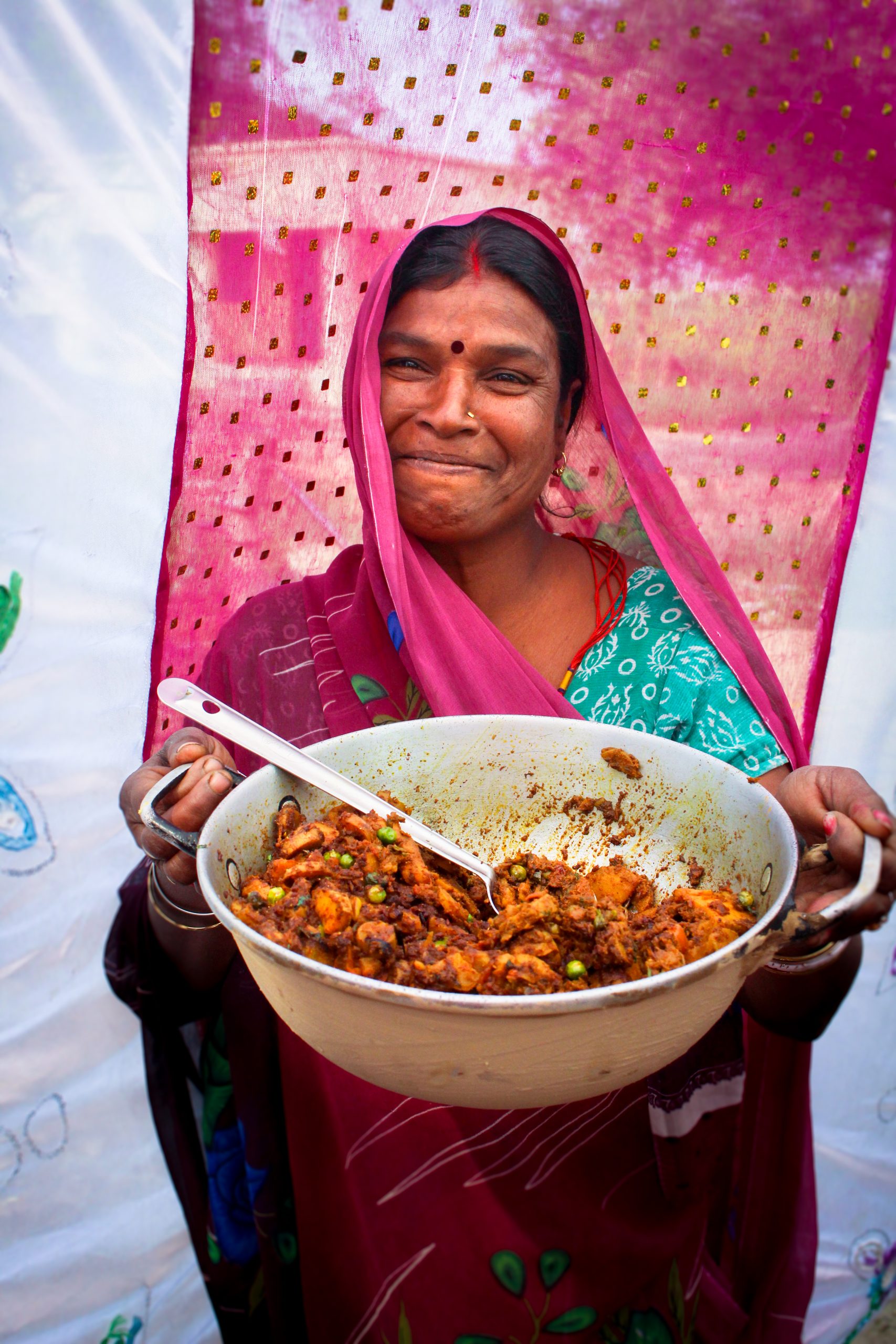 On a bright, windy morning in the rural district of Maharajganj, Sunita Devi listens for the crackling of cumin seeds in hot mustard oil, then adds a heap of chopped onions and garlic to the pan, smiling as they begin to sizzle and brown. She is trying out a new recipe, using a vegetable that—up until a few months ago—she had never heard of, and up until now, has never prepared. That vegetable is the orange sweet potato, one of many biofortified foods showing great promise for use in nutrition interventions to reduce micronutrient deficiencies in developing regions. In the Indian state of Uttar Pradesh, just over half of all children under age five have vitamin A levels too low to meet the needs of their growing bodies, and many more are at risk of deficiency. By introducing orange sweet potato—rich in beta-carotene—TCI-TARINA is hoping to diversify production of farmers while also increasing essential micronutrients in the diets of people like Sunita Devi and her three children.

While the white sweet potato has a minor place in Indian culture as a food used in religious ceremonies, most Indians in rural Uttar Pradesh have never heard of an orange variety, let alone considered growing it for their personal consumption. This project, working to change that, is called “Orange-fleshed Sweet Potato for Nutrition in Uttar Pradesh”, or “ON-UP.” As part of ON-UP, farmers learn and develop regionally-appropriate methods for growing orange sweet potato through a series of Farmer Field Schools, which use participatory and experiment-based methods to teach concepts of soil health and integrated pest management. In addition, nutrition events are hosted in villages to communicate the health benefits of consuming the tubers, and perhaps just as important, how to prepare and consume this vegetable that most people have never seen before.

As the TCI Scholar responsible for implementing the ON-UP project, I have been working with the ON-UP team to organize these events introducing communities to the importance of vitamin A and how a diversified diet including orange sweet potato can help reduce the risk of vitamin A deficiency in adults and children. This March, we hosted a main event of the project: a cooking-show-style recipe competition, where volunteers prepared an array of dishes featuring the orange sweet potato. We worked with enthusiastic women in each village to develop the recipes based on a few criteria: the dishes had to be easy to prepare, use no expensive or hard-to-find ingredients, and use the sweet potato in a nutritionally beneficial way. When beta-carotene, the vitamin A precursor, is exposed to high or prolonged heat such as drying or deep frying, it breaks down and is no longer biologically active. On the other hand, if the vegetable is eaten raw, the molecules remain trapped in the plant cells and cannot be absorbed by the body. Because of this, we want to encourage people to cook sweet potato gently until just soft, such as by steaming, boiling, or roasting. It is also important to consume the vegetable with some oil or fat, as vitamin A is fat soluble. These requirements ensured that the recipes we promoted were both feasible for women to prepare, and would maximize the nutritional benefit of consuming orange sweet potato.

We met a variety of challenges when hosting this event, but still managed to garner significant interest and excitement about the crop that many of the participants had already planted in their fields and kitchen gardens, thanks to the agricultural component of the project. The biggest challenges we faced in hosting our event were cultural. In a few villages, there is a tradition of daughters-in-law not being permitted to leave their house. For these villages, we had to approach individual households and seek permission from the husband or mother-in-law for the woman to attend, but even then, many daughters-in-law feared they would fall behind on their household work and declined to attend. The mothers-in-law attended our event in these villages, and we tried to stress the importance that they share the information with others in their household. In another village, people were discriminatory based on caste, and informed us that they would refuse to eat any foods prepared by a lower-caste volunteer. This was a tricky situation; we felt uncomfortable screening our volunteer selection based on caste. As it turned out, our original lower-caste volunteer had to visit a sick relative on the week of our event, and a higher-caste woman came forward to volunteer as a chef. This incident highlights the strong role that caste still plays in some villages and how it can impede access to beneficial programs such as ours. This is doubly detrimental since low caste families are more likely to have poor diets and micronutrient deficiencies from historic social and economic discrimination.

Despite these challenges, there were notable successes as well. In one village, we had a huge turnout, with over 100 men, women, and children in attendance. At this event, we were also honored to have in attendance both the Health and Nutrition Counselor from a local hospital and a Program Officer for the Child Development Program (CDP), who is responsible for overseeing the Anganwadi (child health) centers in the block. At another event, after we gave out badges to our volunteer chefs, a dance party broke out, and a group of older women improvised lyrics to a traditional song, singing about the benefits of orange sweet potato that they had just learned. Our team joined in, and we celebrated the opportunities for better health that orange sweet potato is providing this community.

Taking feedback from event attendants, we found that we had left a positive impression. People were drawn to our events by their curiosity for why there was a tent and music set up, and when they learned that orange sweet potato was being prepared, they became excited to taste dishes made with the same vegetable that had been promoted in their village as a crop. While not everyone remembered all the health benefits of orange sweet potato or vitamin A, nearly everyone expounded on how tasty the dishes had been, and were happy to report that they now know how to prepare orange sweet potato in a variety of ways. We were successful in communicating that sweet potato should not be eaten raw, and we found that after the event, people who had chosen not to grow orange sweet potato this season were curious to know if it would be available again and how they could learn to grow it. We encouraged these people to seek vines from their friends and neighbors for next season.

Moving forward, we have many more events to host in these villages, and what we learned from the recipe competition will be useful in deciding how we structure these events and whom we target with the messages. We will be engaging men in discussion-based programs on the important role they play in the health of their family, and ensuring that, as primary information providers for their wives, they have up-to-date and correct knowledge on infant and child nutrition. We will also conduct shorter, small-group meetings with daughters-in-law, so they will be both permitted and able to attend. We are hopeful that these communities will continue to welcome this new orange food onto their plates, and that the ON-UP project will be a catalyst for better health and nutrition in Uttar Pradesh.

Kathryn Merckel (krm246@cornell.edu) is a PhD student and a Tata-Cornell Scholar in the Division of Nutritional Sciences at Cornell University. Her research focuses on promoting biofortified and nutrient-rich crops to address micronutrient deficiencies.