Op-Ed: We’ll Be What We Eat 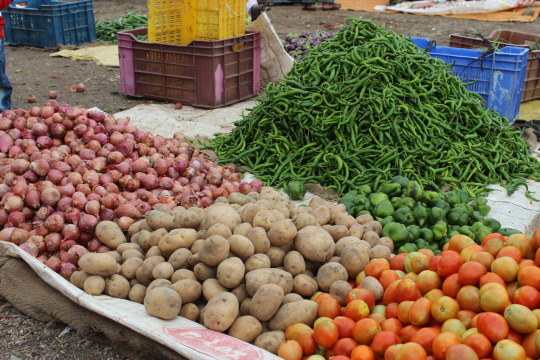 With a five-fold increase in food grain production since 1947, India has moved away from its dependence on food aid to become a net food exporter. However, the country still shares a quarter of the global hunger burden.

By 2011, India had been able to achieve the 2000 UN-sanctioned Millennium Development Goals’ (MDGs) poverty reduction target for 2015, but it had fallen far short of the hunger reduction target. While undernourishment has gone down, it’s still around 15%, among the highest in world.

To meet the 2015 UN-sanctioned Sustainable Development Goals Target No. 2 (SDG 2) of ‘Zero Hunger’ by 2030, India needs to reduce the number of its hungry by at least 200 million. This is going to be one of the hardest challenges, requiring nontraditional intervention at the policy level, including engaging agencies beyond government platforms.

Beyond access to sufficient food, SDG 2.1 specifically calls for access to nutritious food. Access to protein and micronutrient-rich food has been lagging compared to calorie-dense staples. While there are definite trends towards diet diversification, rising relative prices of non-staples limit the affordability of a nutritious diet.

Over the past 50 years, India has seen a steady decline in the real price of staple grains, but a sharp increase — and high volatility — in the prices of fruit and vegetables, pulses and livestock products.

Rising relative prices of nonstaples — and, hence, poor affordability of more nutritious food — has resulted in the high incidence of micronutrient deficiencies in the diets of the poor, causing what’s called ‘hidden hunger’. Hidden hunger is manifested in poor nutrition outcomes such as child stunting and wasting, and high levels of anaemia for women.

Poor nutrition outcomes are known to lower cognitive skills, educational outcomes, productivity and wages in adults who were malnourished as children compared to adults who were not. In addition to greater mortality risks for children, studies have shown that adults who were undernourished in childhood have a greater incidence of non-communicable diseases than those who were properly fed.

Given the close relationship between dietary diversity of households and nutrition outcomes, ensuring that households can access diverse foods requires interventions at two levels.

First, to ensure that there is greater availability of food diversity within the local system. Second, to improve the affordability of these diets. Hence, effective food policy becomes tantamount to a nutrition-sensitive food system that enables transition towards a healthier diet.

Policy debates around food security in India have mainly focused upon ensuring adequate access to calories through acontinued focus on staple grain production. But there is a compelling case for questioning the existing paradigm and the need to open up conversations around access to a goodquality and balanced diet.

Focus on staples has affected incentives to develop markets for non-staples, thus affecting their supply and increasing price uncertainty. Creating new opportunities for food system diversification to cater to changing consumer demand should become a focus for policymakers.

Smallholder agricultural production is closely linked with nutrition and food security in three ways. First, it improves household food security through own production. Second, it reduces the real cost of food, thereby enhancing supplies and making it more affordable.

Third, it improves incomes of farming households enabling them to access nutritious foods.

Through an organised upstream and downstream network of activities, agribusiness value chains could absorb surplus agricultural labour and provide jobs, especially to the youth and women.

To achieve a geographical spread across the subcontinent, the commitment to SDGs would need to be made at all levels, from the Centre and the states to the local panchayats. Prospects for boosting productivity in the lagging regions of India would be higher if the focus is on promoting coarse cereals and pulses in these regions rather than on the big two staple grains, namely, rice and wheat.

Finally, the political economy factors that have impeded progress in tackling hunger and malnutrition in the past need to be identified and redressed.

DISCLAIMER : Views expressed above are the author’s own.