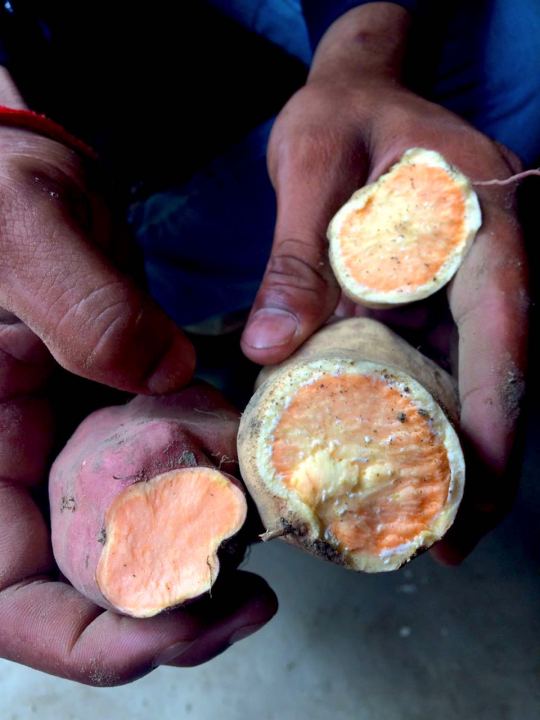 “He says orange-fleshed sweet potato has made his family healthier,” my translator, Shaktikar says as I scribble notes in a small notebook. I make sure not to disturb the iPhone pointed towards the farmer we’re interviewing. It is recording every word it can over the sounds of busy village life—squabbling kids, speeding motorcycles, lazing buffalos.

This is common scene from my month of fieldwork in the Maharajganj district of eastern Uttar Pradesh. This fieldwork was a core part of my time as a TCI Global Fellow, the undergraduate internship program hosted by TCI and CALS Global Fellows. My project is a small part of the ON-UP Project, Orange Flesh Sweet Potato for Nutrition in Uttar Pradesh, which is a TCI-TARINA project lead by Kathryn Merckel, a Tata-Cornell Scholar and third year Ph.D. student in the field of International Nutrition.

Shaktikar is providing me with initial impressions from our interviews that I will then have translated and be able to code for patterns within the stories that we collect from farmers. The goal of my project is to better understand why farmers are choosing to adopt the orange-fleshed sweet potato (OFSP).

OFSP is a beta-carotene, vitamin A-rich tuber that can be grown in all three seasons in India. It can be propagated from tuber or from vine and is easy for farmers to share with their neighbors and preserve between seasons. It has strong potential to reduce seasonal vitamin A deficiencies in a region where 53% of children suffer from vitamin A deficiency and many more are at risk. This is hard for me to imagine in the middle of mango season, but after talking to farmers who have been growing OFSP for nearly a year, it is clear they feel OFSP has made a big impact in their families and their health. This is another part of my project: seeking to understand the perceived impacts of OFSP on their families and communities.

But, why did you chose to start growing?

I conducted 22 key informant interviews to gather stories directly from the farmers themselves. The interviewees were selected by the ON-UP agriculture extension agents, as they have been visiting each village every 10-15 days for many months now. The farmers were men and women from a range of villages and all at different stages of their OFSP “journey.” Some had been growing OFSP for many months, while others had just received vines to propagate from their neighbors on the day we arrived.

From this variety of perspectives, I have been able to gather a better understanding of farmer reasoning – there’s a lot of commonality – and how they make decisions to adopt a new crop. Their stories range from funny to serious, short to long, but they are all passionate about providing for their families and providing better nutrition for their children. Many told stories of improved health or eyesight, or not being able to grow enough because their family liked eating OFSP so much. Others who didn’t have a good yield told stories of being inspired by their neighbors to grow better because they had seen how successful their neighbors were in growing OFSP.

Farmer stands in her recently transplanted field of OFSP. She grows OFSP because she thinks it’s healthy and her children love to eat it because it’s so tasty. (Photo credit: Hannah Fuller)

The qualitative data from interviews in useful independently, but I am also excited to combine the data with the quantitative data from Katy Merckel’s midline surveys. The midline surveys collect data on both farmer yield and agricultural success, as well as the nutritional outcomes at the household level. I am planning to analyze the midline survey from the perspective of how information about the benefits of OFSP are spreading between families and villages, as well as the spreading of the vines themselves. I look forward to further data analysis after my summer experience with TCI ends, so I can maximize the usefulness of the data that I have collected.

Conducting interviews to understand farmers’ motivations to grow crops, and how they see their choices impacting their families and communities. (Photo credit: Kathryn Merckel)

As we continue to analyze how farmers communicate, how they make decisions, how they work within families and communities to select crops, and how they see the crops’ impact on those families and communities, we can improve our agriculture extension networks to better serve farmers. If we understand what farmers want to learn from agriculture extension agents, then we can cater better to their needs. If we understand how farmers communicate and what they communicate about, we can understand how information from extension agents travels around and beyond villages. If we can understand how they connect the nutritional value of a crop with health impacts on their family, we can continue to develop bio-fortified crops with farmers in mind. Combined, this will improve our extension and implementation of OFSP and similar crops, which ultimately could improve the role of these crops in nutrition interventions. With improved nutrition interventions, we could expect to see improving nutrition outcomes in high need regions like eastern Uttar Pradesh.

Author acknowledgments: None of this work would have been possible without the dedicated members of the ON-UP team and the fantastic staff at Grameen Development Services.

Hannah Fuller is a senior in the College of Agriculture and Life Sciences pursuing a dual degree in Plant Science and International Agriculture and Rural Development, with a minor in Community Food Systems. This summer she served as a TCI Global Fellow / CALS Global Fellow, based in Uttar Pradesh, Inida, where she’s working on a project to understand why farmers choose to grow the orange-fleshed sweet potato and how they see it impacting their communities.