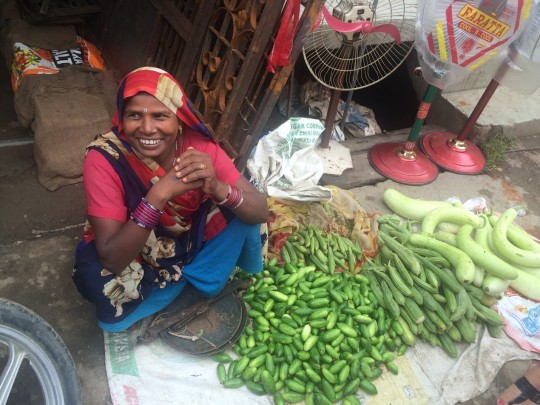 On the 4th of July, I traveled to the Maharajganj District of Eastern Uttar Pradesh with three other TCI colleagues to study market diversity in the Pharenda Block. Our objective was to observe the variety of foods available in four markets and then convert this information into quantitative data that can be used for analysis to better understand the level of market diversity in the region.

The motive and methodology of this study are interesting and simple, a rare combination that merits a detailed account…

Linking market diversity to diet diversity, and why both are important

Over the past several decades, the Green Revolution brought about significant technological advancements that increased staple grain productivity as well as the overall food supply in India. While significant progress has been made toward hunger reduction, staple grains have progressively crowded out other non-staple food crops such as pulses, fresh fruits, and vegetables. Consequently, Indian diets have become increasingly centered on staple grains, mainly wheat and rice, which provide adequate calories, but are lacking in essential nutrients.

Today, much of India’s population suffers from malnutrition and micronutrient deficiencies, despite impressive economic growth for more than a decade. According to UNICEF, half of the children under age five are stunted due to chronic malnourishment. Inadequate nutrition can have lifelong consequences, as it can weaken one’s learning ability, immune system, and overall ability to perform productive activities.

The obvious solution to India’s malnutrition challenge is to improve the nutritional intake of its population at large. This can be achieved by promoting the consumption of a more diversified diet, which has a sufficient quantity and variety of nutrients. Simply defined, a ‘diverse diet’ is one that includes an adequate mix of the following food groups:

2. Pulses – non-animal source of protein and rich in vitamin B

4. Dairy – source of high quality protein, calcium, and vitamin B12

7. Dark green leafy vegetables and fruits – rich in vitamin A

8. Other fresh fruits and vegetables – source of vitamin C, micronutrients, and fiber

Diet diversity can be approximated by the number of the above listed food groups consumed over a given interval of time.

Diet diversity largely depends on food available either through food crops produced by households for own consumption, or through food items purchased by households at the market. Thus, markets play an important role in ensuring a diverse diet. Much of the foods that people have access to and options available to them can be understood through markets.

Market diversity is the extent to which different sources of nutrients are available in a market. Similar to diet diversity, market diversity can be approximated by the number of the above listed food groups observed in the market at a given point in time.

The first step toward measuring market diversity is to identify food markets for data collection. In this study, we focused on markets that are accessible to sample villages where data on household food consumption patterns is being collected by TCI under its Technical Assistance and Research for Indian Nutrition and Agriculture (TARINA) project. While many markets met this criterion, we chose only four: Lehra, Bangla Chauraha, Sant Bazaar, and Dhorghat.

We experienced many challenges when interacting with locals to collect data in these locations. For example, while interviewing food vendors at the main food market in Pharenda on the first day of our field visit, we found ourselves surrounded by crowds that had formed to inquire about our presence. Even though we explained our study and the purpose of our visit, we could not assuage the excitement that our presence generated. We later realized that we were being mistaken for representatives of the government tax department. Such concerns made vendors reluctant and much more careful when responding to our questions. Fortunately, our simple questionnaire helped reduce the risk of misreporting.

On the last day of our field visit, we faced similar challenges when traveling to a nearby villages to observe TCI’s ongoing household food consumption survey. During an interview with a male head of household who was a construction contractor, the respondent’s unease and behavior made us question whether he was accurately reporting land owned and crops cultivated. Thus, issues of misperception and mistrust were a constraint to data collection in both the market and village level contexts.

Despite these challenges, visiting different field locations helped us gain a better understanding of commonly known problems. One such example is women’s labor in agriculture and the need for labor-saving technologies. Our field visit coincided with paddy cultivation, and women were manually transplanting paddy saplings from nurseries to their fields. My colleagues and I were all shocked by the speed and efficiency with which these women were working. To try our hand, we jumped into the water-filled field to assist. After ten minutes of bending over and planting, we realized that the seemingly easy task was not so simple. When leaving, we found the same set of women were still engaged in paddy cultivation, with their backs bent and their feet in hot muddy water. It had been more than six hours, and we could not help but to wonder how physically excruciating this task must be for them.

A preliminary look at the data collected revealed that there is no significant difference in the variation of food items available across the four markets. All the markets had significant variation in the types of vegetables available, but this was not the case for fruits. Mango was widely available, whereas bananas, oranges, and apples could only be spotted in the larger markets. In each market, animal meat was sold in a separate corner that was secluded from the rest of the vendors. Fish and chicken appeared to be the most popular choice of meat.

Based on these observations, it seems diet diversity may be heavily influenced by the market availability of food items that are highly seasonal like fruits. However, due to improvements in transportation infrastructure and trade, markets have become much more diverse and homogenous. This is evidenced by the availability of highly perishable foods such as fish in all the small and large markets. Fish is brought daily from Gorakhpur City to the Pharenda Market, where it is then distributed throughout the Maharajganj District. Without public provision of storage, the onus of selling fresh produce in a day or two, before it spoils, lies solely on the sellers. Lack of storage facilities affects meat sellers the most, as one needs cold storage to preserve its quality and to keep it from spoiling.

In conclusion, these four days of fieldwork helped contextualize different lifestyles, occupations, cultures, and societies. It was an eye-opening experience for me, as I learned a great deal about people’s eating habits simply by observing where they go to buy food. Even the gender composition of markets reflected gender roles in different societies. Markets are not only about the goods that are being bought and sold, but they are also about the demographics of who is buying and who is selling, which are additional topics I would like to explore in the future.

Nishtha Jain is a student at the Delhi School of Economics and served as a summer intern at TCI’s TARINA Center of Excellence, based in New Delhi, India.