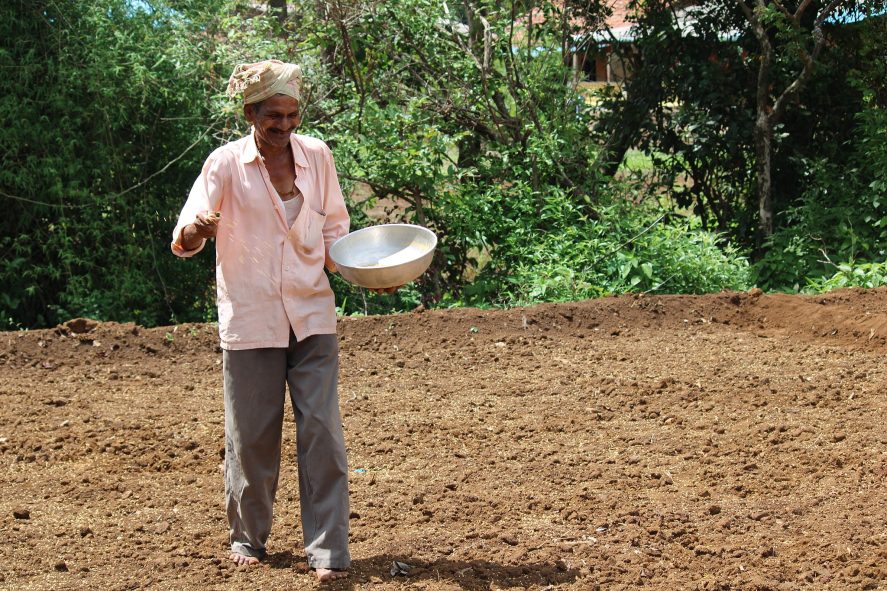 This blog post is part of a series exploring India’s small farm aggregation landscape using TCI’s Database for Indian Farmer Producer Organizations (FPOs). Part of the FPO Hub within the TCI Center of Excellence, the first-of-its-kind database brings together comprehensive data on FPOs in India. The FPO Hub and this research were made possible through grant funding from the Walmart Foundation.

As rising demand for diverse agricultural products creates an opportunity for India’s smallholder farmers to improve their incomes, aggregation into farmer producer organizations (FPOs) is an important tool for farmers to collectively access production inputs and jointly sell produce to maximize their benefits. With the number of FPOs on the rise, western India has emerged as the hub of FPOs in the country, with Maharashtra playing a lead role. Maharashtra is India’s second-most populous state, its third-largest by area, and its largest economy. An agricultural standout with significant cultivation of staples and cash crops, Maharashtra is often hailed as a pioneer in the country’s smallholder aggregation movement. 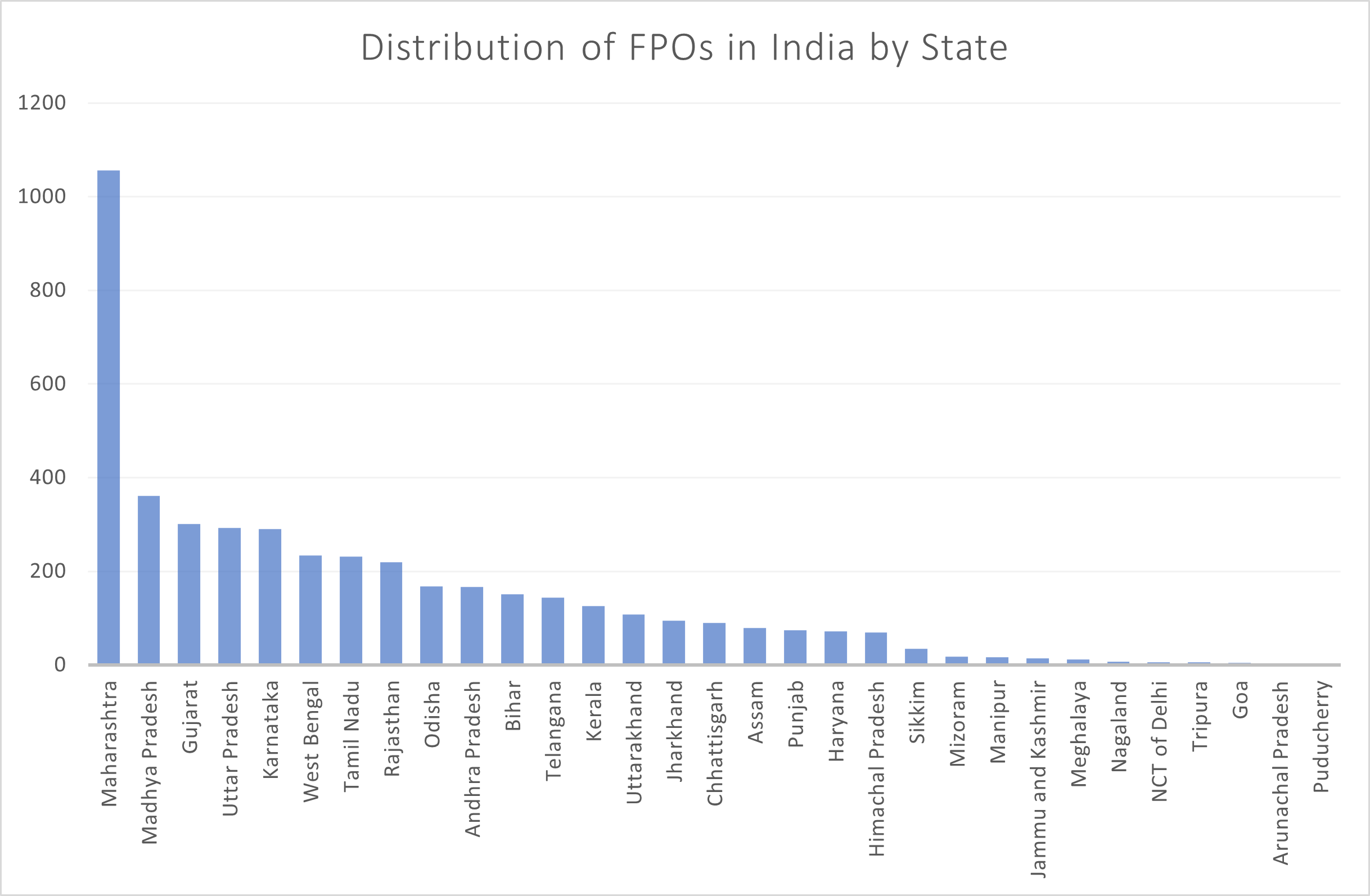 Home to the largest number of FPOs in India, FPO registration in Maharashtra has recently picked up pace. As many as 1,622 new FPOs were formed in the state in 2020. The Small Farmers Agri-Business Consortium (SFAC), which promotes its own FPOs, reported Maharashtra to be the leader among all states registering new FPOs from 2020-2022. Thanks to a blend of conducive agricultural conditions, valuable institutional support, and a history of farmer aggregation, Maharashtra has emerged as a leader of FPO promotion in India.

Maharashtra is historically agrarian, with over 13.6 million farmers, most of whom are smallholder and marginal farmers. It is also one of the largest producers of fruits and vegetables in India, accounting for 11% of total fruit production and 5% of total vegetable production. In addition, Maharashtra is the largest producer of jaggery, pigeon pea, and cotton. Other major crops grown in the state include sorghum, soybean, wheat, maize, and rice.

Maharashtra is also India’s leading state in terms of agriculture marketing reform. In 1963, the Maharashtra Agricultural Produce Marketing Act introduced direct marketing licenses that allowed licensees to procure produce directly from farmers and use it for further processing, export, or trading.

Through additional amendments to the 1963 marketing act, the Government of Maharashtra has introduced reforms that include provisions for single market licenses, farmer consumer markets, and contract farming. Another amendment deregulated the sale and purchase of fruits and vegetables outside of the market area.

A recent initiative seeks to establish an e-trading platform for agricultural produce in Maharashtra. Such platforms can help to streamline the marketing of agricultural produce, remove information asymmetry, and promote real-time prices based on the actual supply and demand of commodities.

FPO formation is well suited in areas that have an agricultural base and formal markets that allow farmers to directly sell their produce to the end-users. In Maharashtra, an agrarian state with progressive market reforms has resulted in an environment that is conducive to FPO promotion. There have been historical success stories of cooperatives in the state, such as Mahagrapes, which came into existence in 1991. This association of cooperatives helped smallholder grape farmers to export their crops internationally and was supported by the national and state governments. There has also been a historical presence of successful sugar cooperatives in the state.

A Snapshot of FPOs in Maharashtra

According to data available from TCI’s Database for Indian FPOs, there were 1,056 FPOs in Maharashtra in 2019, with a membership of over 320,000 farmers. The revenue across these FPOs was reported at Rs. 777 crores. A total of 33 different crops were grown by these FPOs. Around 88% of FPOs were registered between 2013-2018, with the numbers peaking in 2015, when 433 FPOs were registered. According to the Agricultural Technology Management Agency of India, 50% of the state’s FPOs were set up in the last two years.

Some of the major crops that are marketed by cooperatives in Maharashtra include pulses (tur dal), soybean, cotton, onion, maize, wheat, tomatoes, and chickpeas, among others. This trend is also depicted by ICRISAT crop data, which shows clear cotton and pulse belts in the state. 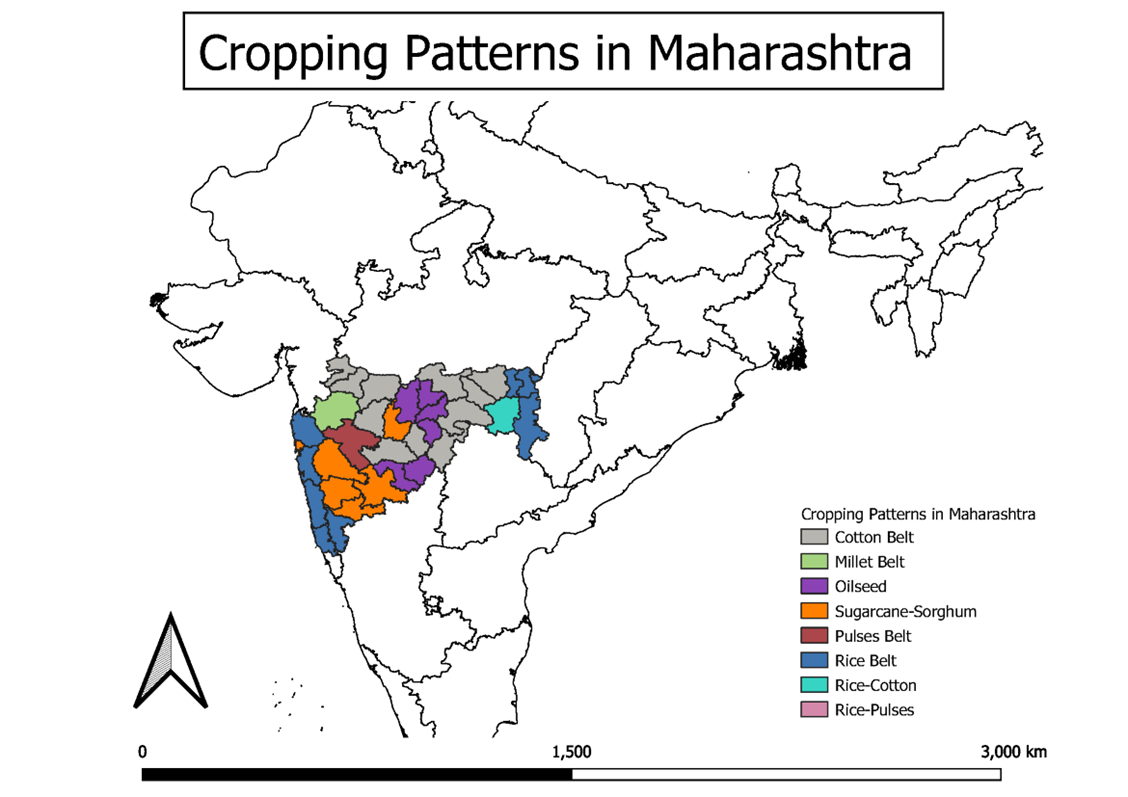 The crop that is most frequently marketed by FPOs across Maharashtra is tur dal or pigeon pea. India is ranked number one in the world in the cultivation and production of tur, with Maharashtra responsible for approximately 30% of overall production. The districts of Latur, Hingoli, and Akola have the highest tur production within the state.

Similarly, Maharashtra is the largest cotton-growing state in India, with a 36% share of the total cultivated cotton area and 22% share of total cotton production in the country. The focus on cotton among Maharashtra FPOs follows these statewide trends. 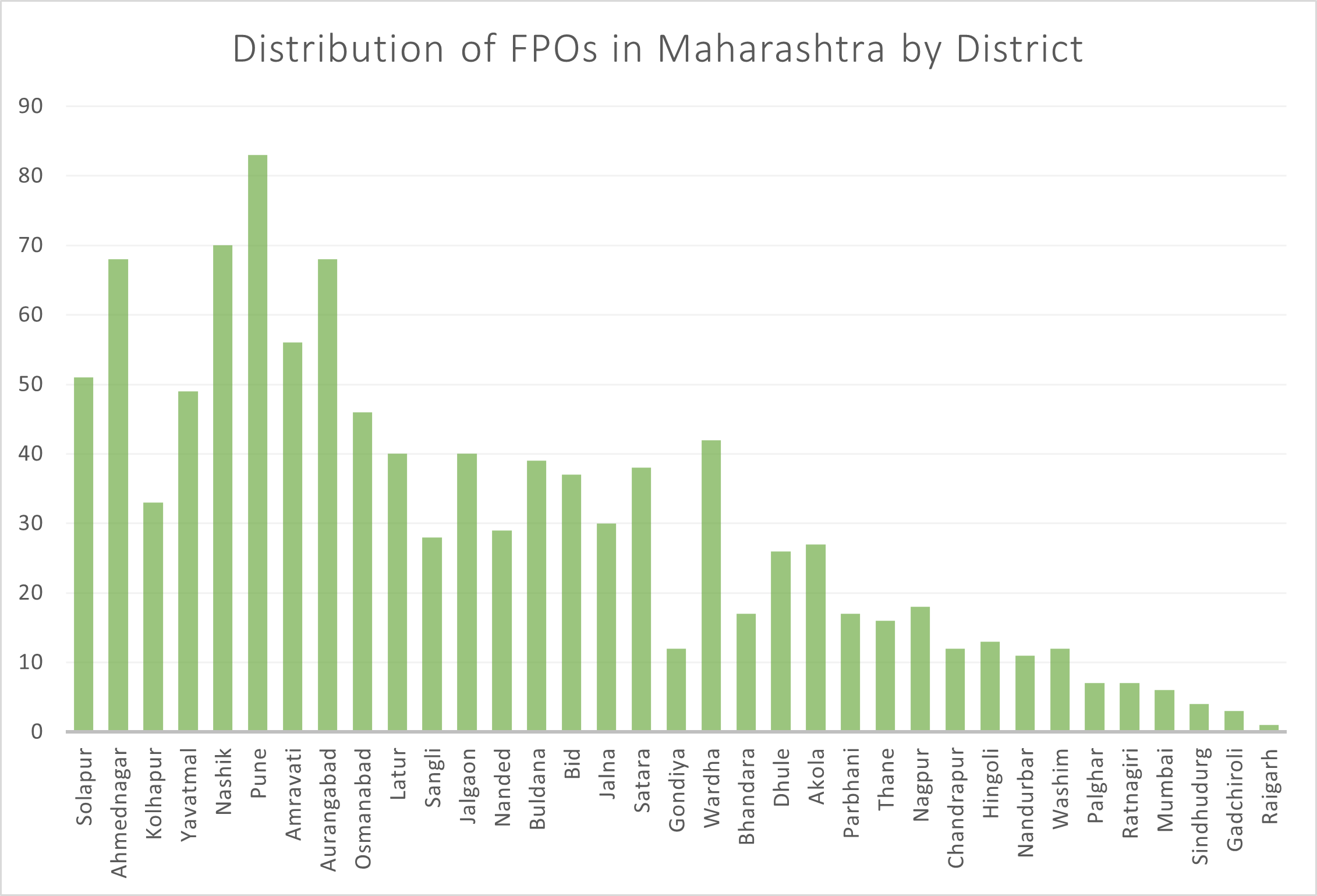 Another district that has substantial revenue from FPOs is Kolhapur, which had a total revenue of Rs. 132.4 crores across 33 FPOs in 2019. According to the TCI-ICRISAT District-Level Database, Kolhapur has the highest cultivated area for sugarcane production in the state. 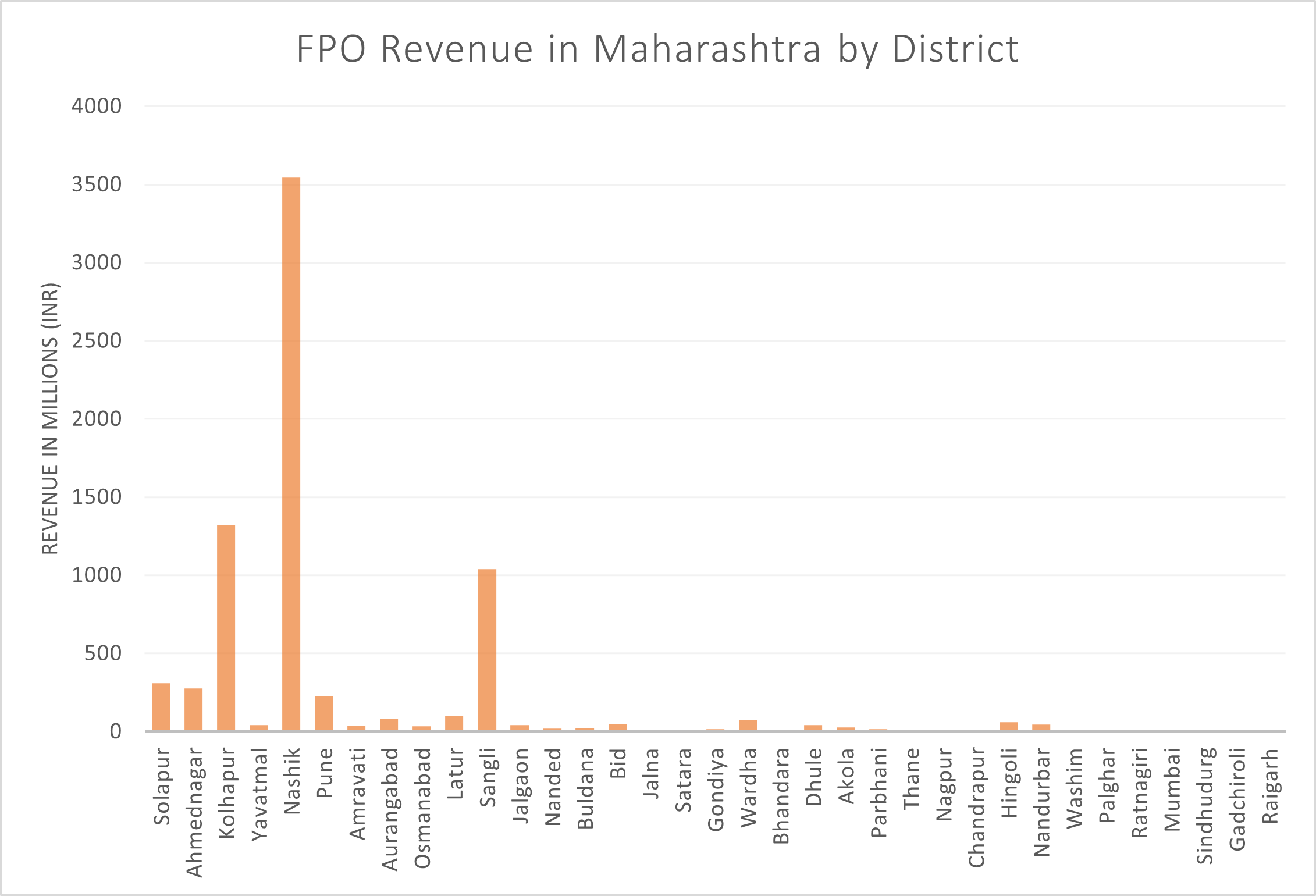 As a result of these initiatives, aggregation models have adopted environmentally sustainable agricultural practices, such as drip systems, under the sustainable sugarcane initiative. These modern methods have also allowed farmers to greatly increase their yields.

Kolhapur district also leads in jaggery production across the state, as favorable soil and environmental conditions make it one of the most concentrated sugarcane-growing regions in Maharashtra. The jaggery produced in Kolhapur is also exported to other countries. According to the Government of India, sugarcane farmers in Kolhapur help to add more than Rs. 13 billion to the Indian economy. This explains the high revenues earned by FPOs in the district. 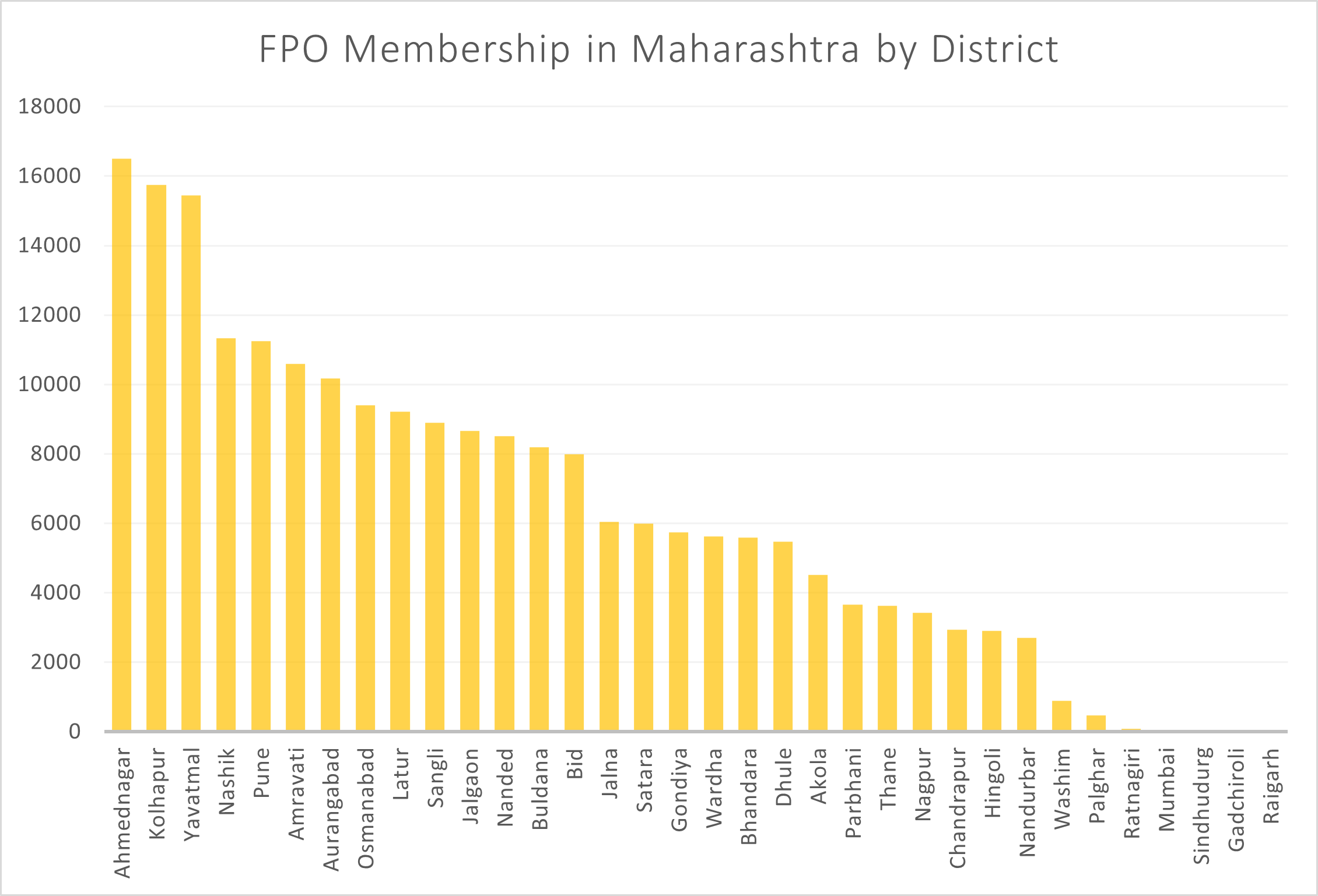 Institutional Support for FPOs in Maharashtra

Currently, FPO promotion takes place both under state patronage as well as through international donors, such as the World Bank-backed Maharashtra Agricultural Competitiveness Project (MACP). This project, which supported over 406 FPOs in Maharashtra, has seen FPOs trained in financial and organizational management, market-led production, post-harvest management, marketing links, and agribusiness. The project reported that, due to aggregated smallholder marketing through the FPOs, farm profits increased by 45% on average for all crops, input costs were reduced by 7%, and price realization increased by 22%.

Another important promoter of FPOs in Maharashtra is the state government, which helps operate farmers markets that include farmer cooperatives, FPOs, and producer companies. The Maharashtra State Agriculture Marketing Board (MSAMB) operates over 31 farmers markets, and the state plans to operate more than 100 in the future.

On top of that, there is also a consortium of FPOs/producer companies in the state that provides a conducive environment for FPO development. MahaFPC is a consortium of farmer producer companies and is a state-level farmer producer company. It was established in 2014 and provides market-linkage support to producer companies. MahaFPC operates in 28 districts of Maharashtra and has over 541 stakeholder FPOs that handled 160,000 tons of agri-commodities in 2021. In 2020, the company procured pulses alone worth Rs. 500 crores in Maharashtra through its network of farmer producer companies. It also reported procuring more than 10,000 tons of soybean oilseeds valued at over Rs. 40 crores for private oil processors in 2021. MahaFPC recently decided to enter into contractual agreements with farmers to procure onions in a bid to bring stability to the open market and reduce the risk of loss to the farmers.

Maharashtra’s FPO environment in a nutshell

Maharashtra is an important agricultural state with a wide variety of diversified crop production. It is a national leader in crops like pigeon pea, cotton, and jaggery. This differs from the majority of other states, which predominantly grow staple crops, such as rice and wheat. While staple crops are fairly streamlined and do not need many market linkages, crops like pigeon pea, sorghum, cotton, and jaggery are more specialized and need additional marketing strategies and input applications. FPOs can help fill in this space and provide farmers with better market linkages, reduced transaction costs, and better access to inputs like fertilizer, pesticides, and farm machinery.

Ali Ilahi is a research support specialist with TCI. He received his Master of Public Administration from the Cornell Institute for Public Affairs with a concentration in international development and a focus on food policy.

*The FPO-related statistics and figures in this post reflect the most up-to-date data available as of 2019.

Distribution of FPOs in India by State

Distribution of FPOs in Maharashtra by District

FPO Revenue in Maharashtra by District

FPO Membership in Maharashtra by District 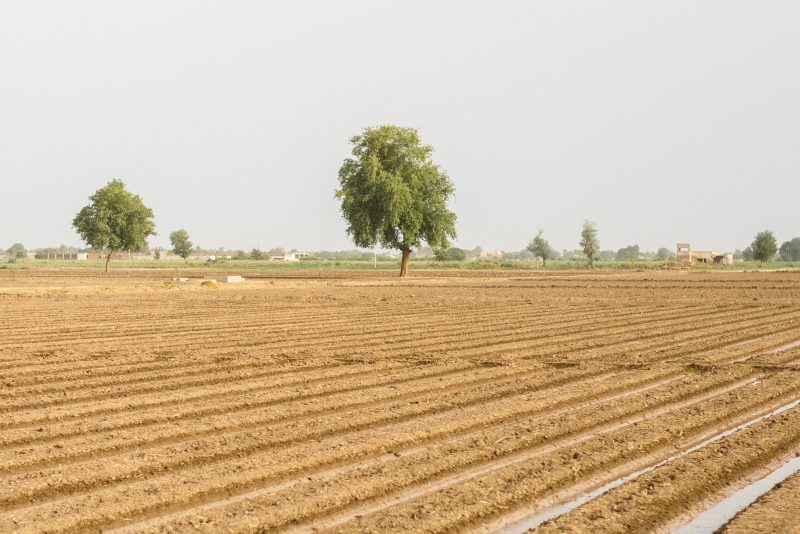